Elaine lets a potential employer borrow Mr. Pitt’s tennis racket, but the injury suffered may ruin her chances, especially when she must get his racket back. Jerry’s girlfriend never laughs, but he meets her roommate who does, so Jerry decides he would like to make “the switch.” George’s model girlfriend may be bulimic. He needs proof, so he meets Kramer’s mother, who’s a bathroom matron. While there he finds out Kramer’s first name, Cosmo. Kramer decides it is time to be himself and begins to use his first name. George has the perfect plan for “the switch,” a menage a trois. 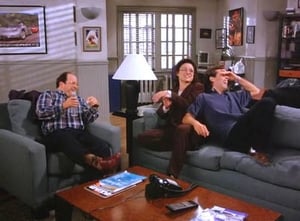