Elaine’s boss wants a special mechanical pencil, so Elaine tries to get one from a stationary store where the clerk has a thing for her. George and his girlfriend pick up a “big salad” for Elaine, that his girlfriend gives to Elaine and she thanks her. Later, George points out that he bought the “big salad.” Jerry discovers that his current girlfriend once dated Newman, who broke off his relationship with her. Kramer plays golf with an ex-ball player who breaks a rule of golf, they have a fight, and later the ball player is wanted for questioning in the murder of a dry cleaner, where a golf tee was involved. Kramer later helps him evade the police in a white Ford Bronco. 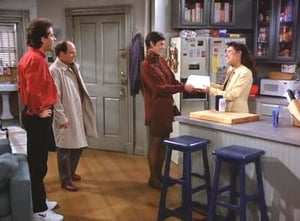