Jerry comments that a friend was hitting on him and Elaine tries to find out if what was true, but gets the voice of the woman and her current boyfriend confused. Elaine’s boss eats his Snickers bar with a knife and fork and idea that soon catches on. George thinks a waitress gave him the finger. Jerry gets caught throwing away a thank you card. Jerry cashes some old birthday checks from his grandmother. Jerry’s working a PBS pledge drive and gets George to bring a Yankee to appear with him, while en-route to the studio, someone gives George the finger. 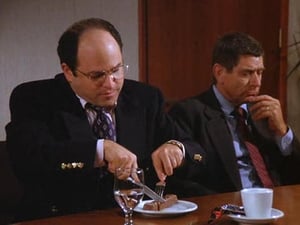