Jerry and Elaine see George’s father with a man with a cape but don’t say hello. Jerry discovers a Chinese woman on George’s phone line after the wires get crossed and he gets a date with her. Kramer gets worried about his sperm count, so he goes to a fertility clinic and then makes a change in his choice of undergarments. Elaine ruins her friend Noreen’s latest romance with a long talker. The Chinese woman turns out to be Jewish and from Long Island. Estelle gets advice about her relationship with Frank from the Chinese woman, but discounts it when she meets her. George’s life is made miserable when his parent’s separate. 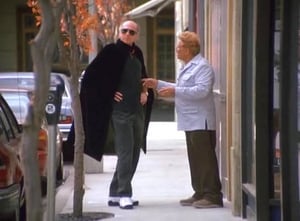