Kramer continues to play with the cable guy. George’s obsession with Marisa makes Susan suspicious. Elaine calls Jerry in Florida and tells him she wants to come and join him. Elaine gets George Marisa’s phone number and now he needs her for an alibi (which involves her “boyfriend” Art Vandelay, an importer/ exporter). Morty’s ace in the hole, to keep him from impeachment, is the woman that Jerry stole the marble rye from, only she doesn’t remember him, at least at first. The cable guy zeros in on Kramer, but he gets away. George’s meeting with Marisa doesn’t go as well as planned and Susan thinks he’s having an affair with Elaine. The cable guy concedes defeat. 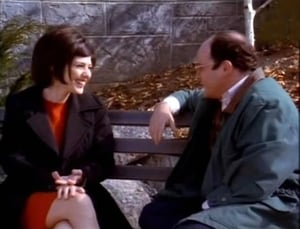