While on their way to the “soup place” Elaine finds an antique armoire she wants. George makes a mistake while trying to get his soup from the “Soup Nazi.” Elaine isn’t allowed to move her armoire into her building, so Kramer offers to watch it for her, out on the street. George and Elaine discuss how annoyed they are by Jerry’s sweet-talking with his current girlfriend, especially their calling each other “Schmoopie.” Elaine makes an ordering error in front of the “Soup Nazi,” gets on his bad side and is banned for a year. In broad daylight and in Kramer’s presence, two “tough” guys come along and take Elaine’s armoire. Kramer relates the story of the armoire to the “Soup Nazi,” who says he has an armoire in the basement that Kramer can have. Jerry’s girlfriend makes a faux pas in the “soup place” and Jerry disavows any knowledge of her. George confronts Jerry and reminds him about their pact. George and Susan see Jerry and his girlfriend at the diner and they begin to compete against each other. Susan appreciates that George is finally showing his feelings in public. Kramer gives Elaine the armoire and tells her where he got it. Elaine goes to thank the “Soup Nazi” but gets even further on his bad side. Jerry discovers the armoire contains the “Soup Nazi”‘s recipes and Elaine takes them for her final confrontation with the “Soup Nazi.” 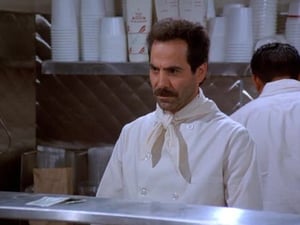 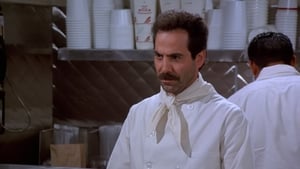